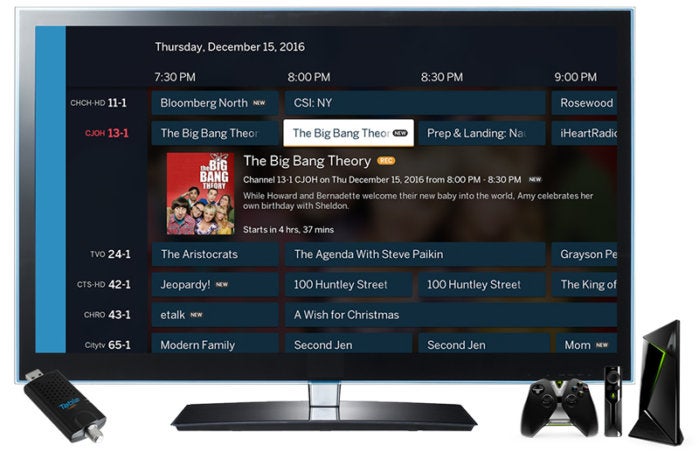 Hard core cord-cutters and those looking join their ranks will be happy to hear about the latest products in Nuvyyo’s Tablo line. The Canadian manufacturer announced two new offerings at CES on Wednesday, plus a cloud-DVR proof-of-concept that will make it easier to slash the cost of TV entertainment.

Install the $99 Tablo Live ‘Antenna anywhere’ Stick wherever you get the strongest reception from broadcast TV towers and it will pull in high-definition TV that you can then stream over your Wi-Fi network to all of the smartphones, tablet, smart TVs, and set-top boxes inside your home. Nuvyyo expects to ship the Tablo Live Stick in the second quarter of 2017.

Android TV owners will soon have an opportunity to record over-the-air broadcasts, thanks to Tablo Droid, a software DVR. All you’ll need to do is plug a USB tuner into an Android set-top box and download the app. Should your Androd TV run out of storage, you’ll be able to record to an external USB hard drive.

In its early days, the software will only work with the Nvidia Shield Android TV and either Nuvyyo’s own Tablo Tuner or Hauppauge’s WinTV-dualHD USB tuner, but Nuvyyo promises broader compatibility down the road.

You’ll get a 30-day trial with time-based recording and a 14-day in-app program guide, but you’ll need to cough up $3.99 per month for a subscription after that. You can continue using the app with a subscription, but you won’t get the guide and you’ll need to manually initiate each recording. The App is scheduled to go live in the Google Play store this spring.

Nuvyyo is also tinkering with the notion of adding a cloud-based DVR-recording subscription service for its Tablo Live Stick, and the company is showing a proof of concept at CES. The service will provide users with “a set number of hours of cloud DVR storage for a monthly fee.” You can expect to hear more about this service, and what it’ll cost, closer to the Tablo Live Stick’s launch