Menu
Tweet Pin It
By
Byron Wien
I spent ten days in May talking with institutional investors in Singapore, Hong Kong, Tokyo and Beijing. There was considerable interest in the various problems the Trump administration was encountering that prevented the implementation of his pro-growth agenda. These investors strongly believe that Asia would benefit from greater American growth.

One institutional investor in Singapore went so far as to wonder whether electing a billionaire as president, a man who was accustomed to doing things his own way without opposition, didn’t represent “a peaking of capitalism.” While I do not support that view, there is no question that Asians are following the political developments in the United States closely, because America is a critical factor in the economies of the region. I was asked almost everywhere whether Trump would be impeached and I told questioners it was unlikely.

The regions I visited lack some of the problems facing the West. These countries do not have to deal with an influx of immigrants and there is no terrorism. People feel safe. There is widespread belief that China will be the largest economy in the world sometime in the 2030s as it continues to grow at better than 5% while the West grows at 2%. The Asian countries take pride in their commitment to education and their work ethic and wonder whether the West is so committed to a comfortable lifestyle that it is getting soft. 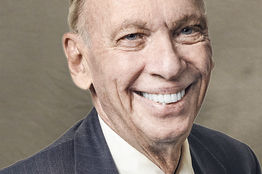 The Scary Signal of the Bond Market

Will ‘Anarchy’ in D.C. Undermine Stocks?

Trump Will Pivot to Moderate Stance

Although most Asian observers think China’s GDP growth numbers are inflated at 6.5%, they agree that the economy there is expanding strongly. The policy makers in China are using various fiscal and monetary tools to manage whatever deceleration is taking place. Capital formation is continuing at better than 4% growth and inflation at less than 3%, so the Chinese economy appears to be maintaining a healthy tone. Most measures of economic activity are in a shallow decline from 2014 levels, but fixed asset investment has surged recently as a result of consumer demand for housing.

China’s looming problem is leverage. Total social financing has increased from RMB 111,000 billion in 2012 to RMB 190,000 billion now. Every category has shown an increase – bank loans, government debt, corporate bonds, consumer credit and shadow banking. Total social financing has increased from 220% of GDP to 250%. Interest rates range from 2.7% on central government debt to 4.4% on bank loans, but borrowing from the shadow banking system is much more expensive at 14%. As a result, interest payments in China are 14% of GDP; they are 12% in the United States and 2.4% in Japan. Nobody seems to know the size of the non-performing loans in China, but this is the major concern. The assumption is that the People’s Bank of China can contain the problem, but the risk is that it cannot. Few believe a crisis is imminent as long as the economy keeps growing at 5% or more. The financial regulators have introduced a new rule that permits the banking industry to convert non-performing loans into equity, which should soften that problem on the balance sheets of traditional and shadow banks, but the issue is not going away and the conversion policy could turn out to be dangerous.

Corporate profitability is decreasing. Operating margins were 15% in 2007; they are 5% now and net margins have shrunk from 14% to 3%. Return on equity has dropped from 19% for state-owned entities to 6% from 2007 to 2016 and from 18% to 9% for private companies in the same time span. Private equity activity continues steady at around $10 billion annually and merger and acquisitions activity is robust. The problem with the Chinese equity market is that valuations are high at 20x earnings, and earnings growth is meager across the whole A-share universe. Still, GDP per capital is growing at 6.5% annually and the middle class is expanding from 43% of households in 2015 to a projected 60% by 2020. As we all know, China’s population is aging. In 2015 there were 170 million people over 65; by 2050 there are expected to be 370 million. Healthcare expenditures are 5.5% of GDP now compared with 17% in the U.S. and life insurance covers only 2% of the population compared to 10% in developed markets.

The government in China is focusing on its “One Belt One Road” initiative. Xi Jinping introduced this program in 2013, recognizing that continued growth depended on expanding trade and exports beyond the United States, Europe and China’s internal market. China hopes to improve infrastructure abroad and sell goods to raise the standard of living in Eurasia along the old Silk Road. Some 60 countries are targeted. The economic development of western China is also an important objective of the program. In addition, the government expects to establish a maritime Silk Road to countries in the Pacific and Australia. China is prepared to step up investment abroad as part of the “One Belt One Road” initiative. Another critical goal is to increase China’s influence in world affairs. As the second largest economy, China believes it should play a role in geopolitical policy making.

The problems confronting the Trump administration have weakened the dollar and perhaps reduced the desire of wealthy Chinese to move capital out of the country. This outward flow of assets had been an issue and foreign currency reserves had been drawn down seriously. China wants to maintain the current level of reserves and has introduced measures to reduce capital flight. In most cases, major investments overseas by Chinese companies have been done with capital borrowed from banks in the countries where the investments have been made.

There is considerable attention being paid to the 19th National Congress of the Communist Party to be held in Beijing this fall. Xi Jinping is expected to solidify his power and emphasize his anti-corruption program, which has been an important objective. Corruption has been a problem in China for centuries and is partly a result of decentralized authority. More power is expected to be brought into Beijing to improve the situation. One of the reasons for corruption is that government salaries have been too low, and recently they have even been cut. In Singapore and Hong Kong, officials are paid well and there is less corruption. There is no evidence that China expects to use increased military strength to acquire additional territory. The focus is on improving the economy as it stands. The whole region is worried about North Korea’s unpredictability, but China likes the fact that there is a buffer between the South Korean democracy and China. It is uncertain and apprehensive about the new leadership in South Korea.

There is general agreement that the economy in China is slowing, but not yet to troublesome levels. There are signs everywhere. Vehicle sales have dropped sharply, manufacturing PMI is back to just above 50%, bond yields have risen and the stock market has declined from its recent high. At 5% or less growth, the number of jobs created would be low enough to create some social unrest, but growth now appears to be above that level. The government is prepared to increase fiscal and monetary stimulus to assure growth that enables satisfactory job creation. Not all the economic news on China is, however, bad. Recent data showed house sales up 17%, bank loans up 13%, bank deposits up 10% and retail sales up 11%. There does not seem to be a Chinese populist movement demanding democracy except among a relatively small group of young people. Hong Kong’s present status would appear secure and nobody talks about Taiwan in any terms other than as a trading partner. Taking it over seems to be off the table.

There are other issues that were discussed actively on last year’s trip that are getting little attention now. Everyone in Asia was worried about a hard landing in China a year ago and that fear is largely diminished except among the banking system bears. A year ago, there were still some people who believed China was a gleaming economic comet that would come to a bad end in the form of a serious deflationary slowdown similar to Japan’s in the 1990s. Nobody makes the Japan comparison today. A year ago there was a certain anxiousness about possible Chinese military action to protect its fishing rights in the South China Sea and to maintain ownership of certain islands there claimed by the Japanese. That concern would appear to have subsided.

While there are plenty of highly publicized entrepreneurs in China, policy reflected in taxes, banking practices and land acquisition favors state-owned enterprises. The private sector is pressing the government to lower corporate taxes. Some Chinese companies are moving offshore because of taxes and electricity costs. The cost of domestic labor continues to be attractive, although inequality is a problem for China. The bottom 50% of the population in terms of income is not happy.

The leadership in China is taking its responsibilities as a world power seriously. It knows that a financial collapse in China could cause a financial crisis throughout the world and an economic crisis in the region. Its relationship with the U.S. has warmed somewhat since the election, but the Chinese leadership is wary that Trump could change his position on issues abruptly.

You can always complain about the humidity in Singapore, but the country continues to be one of the most important economies in Southeast Asia. With a population of five million, it continues to grow. Its average per capita income has increased from $28,000 in 2000–2007 to $50,000 currently. It has low inflation and a stable currency and its legal and regulatory system is comparable to those of the most advanced economies. The Singaporeans I met with are curious about the spread of populism across Europe and the Unites States and wonder whether they will see it in Asia. They are also troubled by the recent weakness of the dollar and wonder whether this will be reversed to the extent the Federal Reserve tightens rates further. In view of current political uncertainties, they are concerned that Trump’s pro-growth agenda will have difficulty getting passed and that therefore the U.S. growth will be disappointing. This supports a view that the market is overpriced.

I spoke with a large group of institutional investors in Japan. I told them that I was optimistic on the outlook for the Japanese economy and the equity market there. Real GDP looked like it was going to come in at 1.5%, the CPI would be better than 1% and corporate profits would be strong. I expected the yen to depreciate further and exports to improve further. These investors were skeptical. They have suspicions that growth was dependent on government stimulus and that the economy had no natural momentum of its own. They were also worried that Shinzo Abe’s Third Arrow of structural reform, governance improvement and investment, was not working and that business leaders were fearful of making capital decisions. I told them that there were a number of Japanese companies growing at better than 10% with multiples below 20, but they were unwilling to believe that their market was undervalued. We have all learned that the greatest opportunities occur in markets where investors are negative. Let’s hope that is the case this time.
[Source”timesofindia”]